The use of ultrasound activated pin osteosynthesis (Sonic Weld) with resorbable plating in the repair of orbital floor fractures:  a preliminary report.

The titanium plating and screw fixation system has been the traditional approach to reconstruction of the facial skeleton for decades.  However there are drawbacks with titanium plating including postoperative palpation of the plate, soft tissue irritation, weakening of bone from excessive rigid fixation, radiographic interference for future studies, and possible need for operative plate removal . In addition, some patients note hot and cold sensitivity as a result of the thermoconductive properties of titanium. In the pediatric population, titanium plates can cause growth restriction, plate exposure, infection, and migration .

Biodegradable plates and screws have the advantage of slowly resorbing over a period of time, allowing time for the fracture to heal and then dissolving . The D-lactide and L-lactide polymers (50:50) allow for an eight- to ten-week fixation. Thus, a resorbed plate will not be palpable after this period of resorption. This also reduces the risk of extrusion and/or pain from loose permanent plating or screws, the occurrence of local or systemic foreign body effects, and does not inhibit growth restriction.

One major drawback of bioabsorbable plating is the added operative time required for its use. Many plating systems require tapping prior to the use of bioresorbable screws, adding steps to the fixation process.  Ultrasound activated pin osteosynthesis , The SonicWeld Rx (KLS Martin LP, Jacksonville, FL), uses ultrasound energy to place resorbable pins within a three dimensional structure. Heat generated via ultrasound vibrations rapidly melt and mold the polymers into preformed holes generated with a drill. Rather than manually inserting the screws, the ultrasound vibrations rapidly insert and mold the screw into the holes created by the drillbit.

The purpose of this study was to evaluate short-term surgical outcomes of using the SonicWeld Rx system to reduce and stabilize fractures of the orbit and midface in adult patients.

A retrospective electronic chart review was conducted on all patients undergoing craniofacial surgery from October 2006 to September 2007. The inclusion criteria consisted of all patients, adult or pediatric, who had undergone any reconstructive surgery using the SonicWeld Rx system. All patients treated with this system were included in the study.

The SonicWeld Rx plating system includes plates ($245.00), pins ($71.00), the ultrasound-heating device, a water bath, heating pen, drill and drillbits. The system is available with screw diameters between 1.6 to 2.1 mm, and plate profiles of 1.0 mm. They are stored at room temperature.

All orbital floor fractures in this study were visualized by a transconjuctival approach. The orbital floor fractures were then measured. An appropriate-sized resorbable plate was trimmed to size with either standard scissors or the heating pen. The resulting plate was then heated using the Excelsior water bath to 65 degrees Celsius, placed into the surgical site after several seconds, and manually shaped to fit the contours of the orbit. If the plate required further contouring while placed within the surgical site, it was irrigated with hot water to allow for continued molding. A drill is used to create a hole for the resorbable screws. The ultrasound-heating device applies heat to the screw as it fits into the pretapped hole and molds the screw into its preformed hole creating a tight seal and a stable fixation of the plate.

The charts were analyzed for diagnosis, age, gender, complications, and type of surgical correction performed. Patients were followed for up to eight weeks following surgical repair.

Nine patients underwent repair of the facial skeleton during this time period.  The types of injuries included eight patients with orbital floor fractures, and one patient with a zygomaticomaxillary complex fracture. The size of the surgical defects or fractures ranged from 1.0 to 3.0 cm.

There was no mechanical failure of the system, and all plates were firmly approximated to cortical bone.  Screw breakage did not occur in any of the procedures and no screws were lost. There was no apparent damage to the periosteum or cortical bone. In addition, thermal injury to surrounding tissues was not observed.

Almost all patients were seen for follow-up at one and four weeks postoperatively. Symmetry, normal eye movement and position, successful reduction of the fracture site, and pleasing aesthetic results were evaluated. No patients required revisions or immediate intervention at the time of follow-up. Postoperative examination of the bony orbit and globes revealed no abnormalities. No exopthalmos or enopthalmos was observed. Patients had full range of extraocular movements in all cases. Two patients complained of diplopia with upward and downward gaze, and one patient noted mild temporary diploplia with upward gaze only. Three patients noted significant conjunctival irritation that improved with artificial tears. Preoperative restricted eye movement was noted in one patient, and resolved postoperatively. Wound infection or postoperative orbital cellulitis was not seen. There was no significant increase in postoperative pain or other ophthalmic complaints. 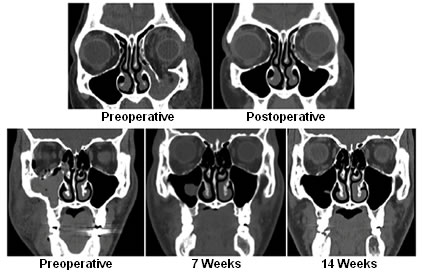 Resorbable bone implants have been clinically available since 1996 . The most widely used materials for resorbable plating are poly-lactide polymers, often coupled with poly-glycolide polymers, found in most resorbable sutures . The poly-glycolide polymer quickens the degradation of the compound due to its hydrophilicity; however, it has been found to cause a greater tissue reaction than poly-lactide polymers . Biodegradable products have been in development since 1971 . Since then, a significant amount of clinical research in pediatric craniofacial surgery, oral maxillofacial surgery, and maxillofacial fracture repair have analyzed the roles of plate stability, fracture reduction and fixation, and complication rates.

Perhaps the most widely studied group is that of the pediatric craniofacial patients, where a major concern is that of growth restriction and need for secondary removal following device loosening, skin irritation, and device exposure found with the use of titanium plating . In a combined prospective/retrospective study by Eppley et al., 1883 pediatric craniosynostosis patients were examined by twelve surgeons at seven institutions over a five-year period from 1997 to 2002 . A poly-L-lactide-polyglycolic copolymer (82%-18%) was used. They found a 0.2% rate of infectious complications, device instability in 0.3%, and self-limiting local foreign-body reactions in 0.7% of patients. Less than 0.5% of patients required re-operation due to device-related complications. These complication rates are reportedly lower than those with titanium plating.

Resorbable plating has been studied systematically in adult patients as well . Cheung et al. completed a prospective, randomized clinical controlled trial comparing the morbidities of titanium and bioresorbable fixations in 60 adult patients (177 osteotomies) undergoing orthognathic surgery . A resorbable system made of self-reinforced poly-L/DL lactic acid copolymer in a ratio of 70% L-lactide and 30% D-lactide was used. They found a similar rate of postoperative infection, wound dehiscence, occurrence of sinus tract, plate exposure, palpability, and plate removal between the two groups. There was no significant difference in subjective patient parameters such as wound discomfort, stability of the fracture fixation, palpability of plate, and overall satisfaction.

Resorbable implants have also been studied for their use in craniofacial fracture reconstruction. In a study by Moe and Weisman, 35 craniofacial fractures were repaired with the use of resorbable implants composed of a polymer of 70% poly-L and 30% poly D/liter lactic acid. Although resorbable mesh and tacks were used for various surgical procedures of the head and neck, resorbable plates and screws were used only in the repair of LeFort fractures, and a zygomaticomaxillary fracture. Overall, there was an 11% incidence of complications reported (four complications in 35 procedures), including partial skin necrosis in two patients, osteomyelitis in one patient, and plate exposure in one patient. However, one of the patients who developed a complication was a heavy smoker, and two others had undergone previous radiation therapy. Preliminary data suggest that resorbable material is a safe method of craniofacial fracture repair.

Our preliminary data show that the SonicWeld Rx biodegradable plates and screws are a versatile and safe method for repair of orbital rim fractures and fractures of the midface. The SonicWeld Rx plates have a retained fixation strength that persists up to ten weeks after implantation, with complete resorption between 16 and 30 months after surgery. Thus, during the reossification period (six to eight weeks), a stable yet temporary, rigid fixation device is provided. The later degradation of the implant prevents palpation of the plates, local or systemic foreign body effects, and does not inhibit growth restriction.

Due to its recent introduction, there is a paucity of data examining the complications of the KLS Martin SonicWeld Rx system. Our study consisted of eight orbital floor repairs, and one zygomaticomaxillary complex fracture repair. Transient diplopia was observed in three patients postoperatively, which was most likely a result of muscle injury to the inferior rectus as a result of the original fracture. There were no changes in visual acuity, and all patients were evaluated by an ophthalmologist pre- and postoperatively.

The unique ultrasound-heating system allows for specific advantages. As the ultrasound vibrations rapidly melt and mold the polymers into preformed holes, the time taken to reduce and fixate the involved bone is decreased. In addition, by eliminating self-tapping screws, the effort of the surgeon is decreased, which results in less wrist fatigue.

The screws and plates used in the Sonic Weld Rx Plating System can bend into complex 3-dimensional shapes with heat. This allows for a completely moldable system and allow for placement and fixation of fractures not possible with titanium plating systems. Since the resorbable screw melts into the preformed drill hole, emergency screws are not necessary. As an added safety feature, any displaced screws in the orbit or any cavity do not have to be retrieved, due to the bioabsorable features of the plating system.

The authors found Sonic Weld Rx a technically easy and adaptable system to use. Plates are molded in situ with the use of hot water irrigation to allow for a precise fit. In this study, residents and fellows used the resorbable plating system, under the guidance of an attending surgeon.

Our initial impression of this system is highly favorable. Clearly bioabsorable plating will continue to play a larger role in plating and fixation of fractures. However, further studies with a larger sample size, and longer follow-up are needed to fully assess treatment outcomes and efficacy of the Sonic Weld Tx system.