Septoplasty is a term used to describe reshaping of the nasal septum for improvement in either the functional airway passage of the nose or to create a straighter appearance. The septum serves as the foundation for building the nose up and therefore it is critical that the rhinoplasty surgeon can perform a variety of maneuvers to improve the deviated septum.  While septoplasty techniques in the inside of the nose can be straightend with less impact on the outside appearance of the nose, deviation of the septum at the anterior portion (front end) or the dorsal aspect (the top of the septum) will lead to visual twisting of the nose and asymmetry.  In order to adequately address these cases, often times open septoplasty is needed.

Intraoperative photograph demonstrating a deviated nasal septum (left).  In this case, due to the amount of septal deflection, the entire septum was resected and reconstructed to provide an improved nasal airway (right).

Many times, the deviation of the caudal septum can be seen in the base view of the patient. This can be seen as one nostril looking narrower or more asymmetric. 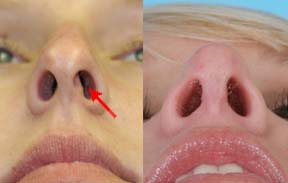 Before and after photograph demonstrating deviation of the septum, seen in the patient’s left nostril (arrow).
After open septoplasty, patient’s septum is straighter and creating improved symmetry of columella and ability to improve nasal airflow.

Additional patient with deviation of septum, seen on base view where the septum is on patient’s left.
See additional photos of this patient.

Simply making one nostril smaller will not improve the nostril discrepancy because the foundation of the nose (the nasal septum) is deviated and requires repositioning.  Repositioning of the septum is a complex procedure involving reattaching the septum or rebuilding and entire new septum to better align the nose. This maneuver is done in limited cases with the deviation will be play a role in the overall function and aesthetics of the nose.

For more information on open septoplasty techniques performed by Dr. Shah can be found here.