The goal of rhinoplasty should not be to change the ethnic appearance of a person, but rather to enhance the attractive features of the face. In most patients, this involves subtle crafting of the nose to provide more emphasis on the patient’s eyes rather than the nose.

Indian noses vary significantly from person to person. Some patients have thick skin and under-projecting (noses which do not stick far enough from the face). These noses require augmentation with cartilage grafting to provide more definition to the nasal tip and remove the bottom heavy appearance of the nose. 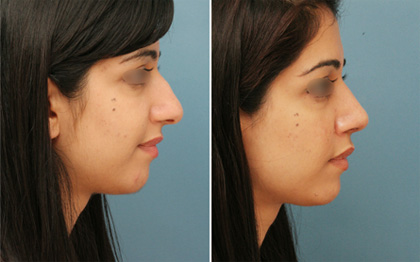 Before and after photos of patient of Dr. Shah’s

Some Indian noses have thinner skin and are over-projected (stick out too far from the face), and these noses must be placed closer to the face. The most difficult Indian nose is that which consists of thick skin and is over-projecting. Many surgeons wrongfully attempt to treat these noses similar to a Caucasian nose and resect cartilage. The problem is that the extra skin has no place to contract and may, in fact, look rounder and more bulbous after surgery. These patients require a special balance of projection to provide adequate nasal tip projection and conservative supratip thinning of the subcutaneous tissues. This subset of patients requires frequent followup and may require steroid injections to prevent scar formation and a soft tissue pollybeak (unsightly round appearance to the nose).

The bridge of the nose should vary from patient to patient and depends on their other facial features. A petite female will often look better with a lower bridge of her nose, depending on her forehead shape and facial shape and length. A taller male will require a higher, stronger dorsum.

Indian and Pakistani patients represent a large range of nasal and facial types. It is important to create a nose which works harmoniously with the face.

Dr. Shah has experience working with a variety of Indian and Pakistani faces and works to help create the look each patient is seeking. He is known for creating natural noses which hide the signs of plastic surgery and enhance the overall appearance of the face.