How I Do It: Treating the crooked nose with a suture suspension technique (Adapted from previous publication)

Correcting the crooked nose deformity can be a formidable task. Diagnosing the anatomical cause for the deviation is a necessary step to achieving a successful outcome. 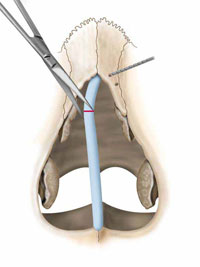 Well intended osteotomies of the ascending process of the maxilla are often performed in an attempt to shift the nasal pyramid into a central position; however, this maneuver is doomed to fail if the deviation is secondary to a septal misdirection. Caudal or inferior septal deflections are routinely approached and successfully treated through a closed nasal approach without disrupting the dorsal nasal septum. However, the twisted nose is often influenced by a proximally deflected dorsal septum. Failure to adequately address a dorsal septal deflection will lead to persistence of the crooked nose deformity. Additionally, deviations of the proximal dorsal nasal septum can cause both functional and aesthetic compromise. The senior author has developed a suture suspension technique to correct proximally deviated dorsal septal deflections.

An external rhinoplasty approach is used to facilitate adequate exposure of the deviated septum. Wide undermining of the skin soft tissue envelope and mucoperichondrium is performed in order to gain wide and complete exposure of both the nasal bones and the deflected septum The deflected dorsal segment of the septum is then divided from the upper lateral cartilages in a submucoperichondrial plane. The free but distorted dorsal nasal septum is vertically transected thru the deviated segment with a converse scissor. Using a 3-0 mm skeeter drill (Xomed, Jacksonville, Florida) two small holes are drilled into the opposite nasal bone from the direction of the septal deflection. The distal segment of the divided septum is brought into a midline position with a horizontal mattress suture (4-0 PDS) extending from its dorsal border to the newly created holes in the nasal bones. (figure 1) A unilateral spreader graft spanning over the transection is placed along the cut dorsal septum opposite the side of the suture. The graft will provide support to the dorsal septum.

Previous authors have described placement of unilateral and bilateral spreader grafts to support the nasal bones in the crooked nose deformity. (1-3) We present an alternative technique, which provides additional stability to the septum by securing a suture to the nasal bones. This technique would not be advisable with comminuted nasal bones due to a lack of adequate support to withstand the suture vector of force.

The crooked nose deformity is a common entity with multiple anatomic causes including high proximally oriented dorsal septal deviations. The suture suspension technique addresses such a deflection with an approach, which provides wide exposure and enough stability to resist the septal cartilage memory.

“The nose should fit the face”
A strong jawline would suggest a stronger nose.