Objective: To quantify tissue tearing force at various anchoring points on the face.

Methods: This is a prospective anatomic study using 4 fresh cadavers of persons aged 60 to 70 years at the
time of death, for a total of 8 sides. Standardized 1-cm distances were measured at the various anchor points, and a single 0 Prolene suture loop was tied at each standardized anchoring point.

Steady force was applied perpendicular to the plane of the face with a digital hanging scale. The scale was pulled until the suture ruptured the tissue at the anchoring point. The values at which the tissue ruptured were recorded, averaged, and compared.

Results: The average tissue force was 7.01 kg for the root of the zygoma vs 3.44 kg for the temporalis fascia (P<.05). The average tissue force was 5.50 kg for infralobular tissue vs 4.09 kg for tissue of the superficial musculoaponeurotic system located 1 cm anterior to the infralobular tissue (P<.05). The force for the fascia of the sternocleidomastoid was 3.89 kg vs 5.57 kg for the mastoid fascia (P<.05). There was a statistically significant difference between vertical bites of the temporalis fascia at 1.90 kg vs horizontal bites of the temporalis at 5.01 kg (P<.05).

Conclusion: The tissue tearing force varies by location on the face as well as suture orientation.

Almost all modern Rhytidectomy techniques use suture suspension of deeper tissues to fixed points along the face. These fixed points can be termed anchor points because they provide the lifted tissue an anchor on which to suspend and thus prevent relaxation of the tissue to the original undesirable position. While some research has focused on the biomechanical properties of superficial musculoaponeurotic system (SMAS) flaps, composite flaps, and skin, we could not find a study that compared the physical properties of anchor points in face-lift surgery.

Anchoring points are selected based on a face-lift surgeon’s experience. During a face-lift operation, the surgeon has several choices for suspending and holding the lifted tissue. He or she may suspend the tissue superiorly to either the temporalis fascia or the periosteum of the zygoma. In their description of the minimal access cranial suspension (MACS) lift, Tonnard et al1 tout the benefits of suturing to the periosteum of the zygoma. Along the lower portion of the face, the tissue can be suspended to either the infralobular soft tissue or the SMAS directly in front of it.

Finally, when suspending cervical elements of the face-lift, surgeons can suspend tissue to either the periosteum of the mastoid or to the sternocleidomastoid (SCM) fascia.

In this study, our goal was to objectively analyze these different anchoring points of the face for rhytidectomy and to measure the tearing forces of the tissue at each point. Statistical analysis of an anchoring point and its counterpart was performed with a 1-tailed paired t test. Figure 1. The digital scale was hooked to each suture, 1 at a time, and pulled upward. The maximum weight used to tear the tissue at each suture site was recorded.

Four fresh cadaver heads were used in this study from men and women older than 60 years at the time of death. A face-lift incision was marked out with a pen. The superior extent went into the temporal hairline while the mid portion went posttragal and postauriclar. The incision then curved gently into the posterior hairline. A No. 10 scalpel was used to elevate the flap. The temporal flap was elevated on the surface of the superficial layer of the deep temporal fascia. The remainder of the flap was elevated in the subcutaneous layer.

A single surgeon performed the suture placement (M.A.C.).A1-cm linear distance was measured, and a suture was thrown through the tissue prior to inducing tension. When a suture was placed over the root of the zygoma or the mastoid periosteum, the needle was scraped on bone to ensure a bite of the periosteum. The direction of pull was maintained perpendicular to the plane of the face in a slow, continuous force. The vector chosen was perpendicular to the face in an effort to standardize the vector on each cadaver head. While this vector is not the same used in a face-lift, it does allow for a means to compare tearing force between different areas and different cadaver heads. A digital hanging scale (H Series Electronic Hanging Scales; American Weigh Scales, Charleston, South Carolina) was used to measure the tearing force. We defined the tearing force of the tissue as the force required for the suture to tear through the tissue. 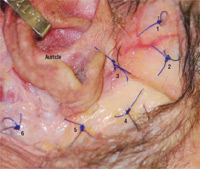 We used a tapered needle and strong suture material, 0 Prolene (Ethicon Inc, Somerville, New Jersey), to test the force of the tissue rather than the breaking strength of the suture being placed. Figure 1 demonstrates how the scale was used to measure tearing weight necessary to break through tissue. We tested 3 regions on the face, each with 2 possible anchor points for a total of 6 test sites. Superiorly, temporalis muscle fascia vs the periosteum at the root of zygoma was tested. When examining the temporalis fascia, we tested sutures thrown parallel to the grain of the fascia (vertical bites) vs those thrown perpendicular to the grain (horizontal bites). Inferiorly along the face, we measured the infralobular soft tissue vs the fascia of the SMAS 1 cmanterior to this point. Posteriorly we measured the fascia of the SCM vs the periosteum of the mastoid fascia.

Fixation points play an important role in most facial rejuvenation operations, including face-lifts, midfacelifts, and brow-lifts. Although the anchor points used for these procedures tend to be somewhat uniform among surgeons, little to no data exist on the relative strength of the tissues at these points. One of us (A.R.S.) has noticed in revision cases that failure in a lift can result from a number of factors, 1 of which involves sutures tearing through tissues. We advocate complete release of tissues and facial ligaments in face-lift and brow-lift surgery to maximize results and decrease the overall force placed on the suspension sutures. It is important to note that we do not advocate excessive force with suspension of deeper tissue. We advocate thorough release of deeper tissues, including release of the masseteric ligaments, zygomatic ligaments, mandibular ligaments, and cervical elements tominimize tension and undue force along facial tissue. Even with adequate release and minimal tissue tension on sutures, dynamic forces of mastication, head turning, and facial expression may still exert substantial forces on suture fixation points. With an appropriate ligamentous release and repositioning of the soft tissues, the actual force at the anchoring points is unknown. We presume that fixating tissues to the strongest anchoring points may reduce the possibility of sutures tearing through tissue. The biomechanical properties of facial suspension have been described sparsely throughout the literature. Several authors have investigated the biomechanical strength of skin, SMAS, and composite flaps.2-5 However, the anchoring point’s role in rhytidectomy is equally important.

Interestingly, we found that horizontally placed sutures withstood significantly larger forces than those placed vertically within the temporalis muscle fascia. Sutures running vertically, with the grain of the fascia, may be more likely to shred the tissue than those placed perpendicular (horizontal) to the grain. Clinically, a surgeon performing lateral brow-lifts may deliberately choose to place sutures against the grain for a stronger anchor point.

While anchor points may play a role in the biomechanical forces in surgery of the aging face, they are just a segment of the complexity of this procedure. Other forces that play a role in the biomechanical physical properties of the aging face include SMAS strength, composite flap strength, skin strength, and suture strength. Saulis et al2 demonstrated a greater tissue breaking strength for skin and composite flap than for SMAS and also found greater suture stability in cervical flaps than in facial flaps. These factors are important in the dynamic context of the face, where suspended tissue must sustain the dayto- day forces of talking, chewing, and neck turning. Male patients and patients with heavy necks can experience poorer outcomes. A contributing factor may be the role of larger static and dynamic forces applied to the anchoring points, even with complete release of facial and cervical ligaments. These patients often exhibit larger platysmal muscles, thicker skin, and more substantial subcutaneous tissue. Therefore, larger facial and cervical forces are likely during mastication, talking, and head turning. To maximize improvement in this difficult subset of patients, we advocate using appropriately strong sutures as well as anchor points that can withstand the larger forces in these patients.

In conclusion, knowledge of which suture sites are more likely to result in stability of suture placement will provide a longer-lasting, more stable result. In cases where a larger amount of tension is needed, the surgeon can be more comfortable placing sutures in areas where more tension can be held. The difference in tensile strength of the various tissues examined has implications for both the aesthetic surgeon and the reconstructive surgeon. Accepted for Publication: February 10, 2009. Correspondence: Anil R. Shah, MD, Division of Facial Plastic Surgery, Department of Otolaryngology–Head and Neck Surgery, University of Chicago, 845 N Michigan Ave, Ste 934 E, Chicago, IL 60611 (anilrshah@gmail.com).